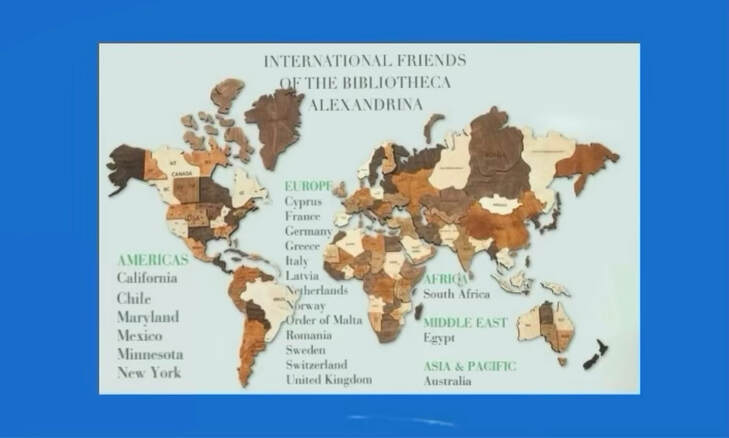 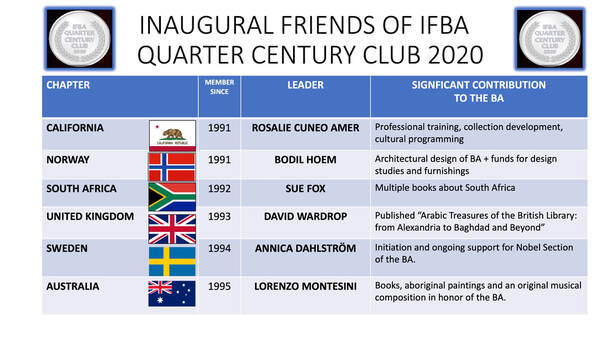 These six chapters are the inaugural members of our Quarter Century Club. They organized to support the BA when it was still an idea and a dream. Thank you to these longstanding members as we look forward to adding more chapters to the Quarter Century Club in the future.
Tharwat Abouraya, Chair IFBA

Norway
The architects chosen to design the BA were Norwegian (Snøhetta).  Norway contributed $2.8 million to architectural studies and NoK 30 million to furnishings, in addition to providing training and expertise and significant participation in the inaugural event opening the Library. ​

·      We designed training programs for BA staff with projects in California in 2000/01, 2005/06, and 2010/11 in Sacramento involving The California State Library, Sacramento Public Library), Exploratorium, San Francisco Public Library, and agencies/services for the blind and visually handicapped in Silicon Valley/ Bay area. Outcomes included further development of the Alexploratorium, services in the Taha Hussein Library, and the Children’s and Young Adult Libraries. Funding assistance came through grants with the US Embassy and UNESCO, and Chapter efforts.  Special gratitude is expressed to California State University, Sacramento, for providing an account in the early years of chapter operation.
·      We communicated with the Egyptian Consulate in San Francisco, 1990/91 and gained considerable support on our projects from Ambassadors assigned there, some in conjunction with the Consulate.  The intensity of the relationship lessened when the Consulate moved to Los Angeles.
·      Professional librarians, including an Alexandrian Greek American patron in our group gave early advice to the BA on Library collection development, gifts and exchanges, and formation of a Friends group, which had gained early momentum in Greece in the later 1990’s.
·      Through collection development and Friends fundraising efforts suggested by Sohair Wastawy, the first chief librarian, we raised considerable funds towards purchase of The Patrologiae reference set and encouragement by Lamia Abdelfattah with the Braille printer purchase. Additional efforts included working closely with UNESCO Association/USA in Oakland, CA, on collaborative fundraising efforts, and facilitating with Brewster Kahle the Internet Archive donation to the Library, all during Dr. Imail Serageldin’s tenure as Director of the BA.
·      In creative programming with the Sacramento-based Readers of Homer Project in 2008, we encouraged Alexandrians and Friends’ chapters to read Homer’s Iliad in their favorite languages (Greek, Arabic, English, Swedish, French, German, Norwegian, Spanish, etc.) coordinated through a scholar from Sacramento, along with The Readers of Homer’s President, Prof. Kathryn Hohlwein, and Carmela Ruby with BA staff.
·      We publicized the Library through creation, development, and updating of our CFBA website constructed by CFBA Friend and webmaster, Lois Shumaker.
·      We assisted in development of new International Friends chapters, such as Baltimore Sister Cities, Inc. between 2000-2002 which blossomed into the DC/MD/VA Chapter, and the Minnesota Chapter, 2009-2010. An additional Colorado chapter was formed in the early 1990’s by Larry Guerreri and closed a few years later.
·      We delivered scores of lectures in Sacramento and the Bay Area on the growth and expansion of the BA to professional and service organizations and in academic (college and university) and school classrooms.
·      With an especially creative idea of California Friend Carmela Marie Ruby, former California State Library Consultant, encouraged by poet Mona El Nashar (BA), we fostered the establishment of the Friends Annual Poetry Reading session with focused themes, beginning in 2004. 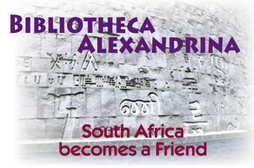 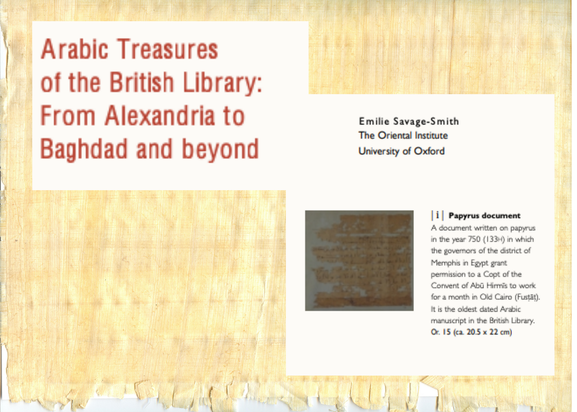 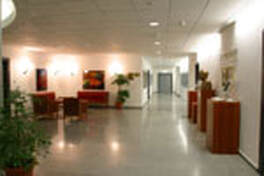 The chief support from the Swedish Friends of Alexandria was the donation of the Nobel library, equipment and books each year.  Located on the third floor of the Bibliotheca Alexandrina (BA), the Nobel Section is dedicated to serving scholars and researchers. The Nobel Section comprises the Nobel Room, the Gad Rausing Auditorium and the Söderberg Lounge. It is furnished with a replica of the furniture and lighting designed especially for the Nobel Institute in Stockholm (opened in 1918) and for the meeting room of the Swedish Cabinet.

The furniture of the Nobel Section was designed by famous Swedish designers, such as Åke Axelsson and Erik Gunnar Asplund. In the Nobel Room, there is a large meeting table made of alder root and cherry wood, which is similar to the table in the Assembly Hall of the Nobel Forum in Stockholm. Another special attraction is the Proverb Rug by Märta Måås-Fjätterström, which has a part from the Hávamál , a nordic mythology poem, written on it.

From The New Bibliotheca Alexandrina: Reflections on a Journey of Achievement , by Mohsen Zahran: Moreover, members of the Friends in Stockholm, from the Swedish Textile Institute, has commissioned the weaving of a special tapestry using the ancient Pharonic handicraft techniques still used in the Siwa Oasis, west of Alexandria. This was donated to the new Bibliotheca Alexandrina from the University of Boras under the auspices of Queen of Norway during the Inauguration ceremonies. It was jointly financed by the Swedish Institute and the Swedish Foreign Affairs Office. This beautiful carpet is hanging now in the Library Restaurant for all to see and appreciate.”

The Nobel Room is the access point for researchers interested in literature. It comprises book collections of Nobel Prize Laureates in Literature from 1901-2006. The bookcases are filled with selections of these literary works written in the winners' original language, with translations into mainly Arabic, English and French.
The Gad Rausing Auditorium is named after the Swedish Rausing family, who offered great financial support to establish the Nobel Section at the Bibliotheca Alexandrina.

​The Söderburg Lounge is named after the Söderburg Family, who also funded the Nobel Section. It includes two computer stands where users can access the Nobel e-Museum, a virtual museum with information about Prizes awarded since 1901, Alfred Nobel and his life, the Nobel Foundation, the prize-awarding institutions and more. 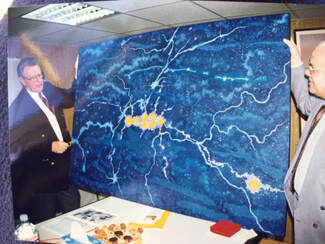 ​Mohsen Zahran, in the history of the Bibliotheca Alexandrina cited above, writes that “the Australian Friends Association was founded in 1995, and is still highly motivated by Lorenzo Montesini, originally from Alexandria. They have incessantly promoted the Bibliotheca Alexandrina through their regular cultural programs, and by their constant efforts to reach Australian officials. They have contributed substantially through book donations, aboriginal paintings, and an original musical composition in honor of the Library named 'The Beacon' by Aaron McMillan.”  The photo, from Mr. Montesini's collection, shows the indigenous painting as it was being donated. 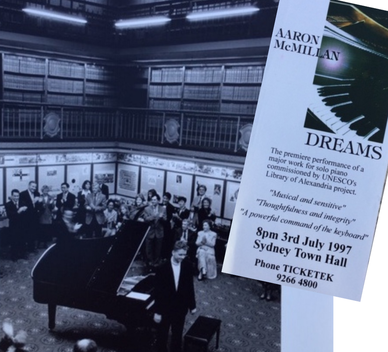 d “The Beacon” has its premier at the Parliament House in Sydney with young Aaron McMillan at the piano, only 20 years old. Cancer took him from the musical world less than a decade later.